We encourage you to read our updated privacy statement.
Project Profile: The Solaire 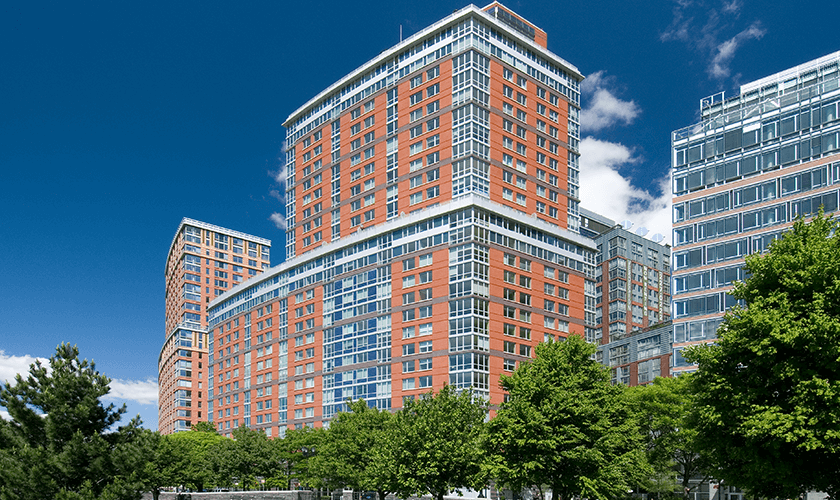 • Provide quiet, energy-efficient rooftop exhaust ventilation that does not interfere with residents' enjoyment of the green-planted rooftops and patio areas.
• Efficiently exhaust air out of the building as needed with compact, powerful fans that can be installed in the mechanical room where space is limited.
• Support the developers' efforts to obtain a LEED Gold Rating from the U.S. Green Building Council.

In September, 2003, after more than two years of planning and construction, America's first "green" residential high-rise building opened its doors in Battery Park City, NY with dedicated fresh air supplied to each of its 293 apartment units. With so much fresh air coming in, used and contaminated air needed to be efficiently exhausted to maintain a positive building pressure. From the beginning, the 27-story Solaire was intended to meet or exceed then New York Governor George Pataki's Green Guidelines which required 30% more energy efficiency than the New York State Energy Code. The Solaire also was the first building designed to comply with the Battery Park City Authority's Residential Environmental Guidelines.

To meet its "green" goals and to increase its chances of achieving a LEED Gold Rating from the U. S. Green Building Council, The Solaire was designed with numerous sustainable features including rooftop gardens and plant cover to alleviate the common heat island effect that plagues most urban environments. The primary ventilation challenge was to install energy efficient rooftop exhaust fans that would operate quietly and not interfere with residents' use of the rooftop.

To exhaust air out of the building as fresh air enters the apartments, 27 Greenheck centrifugal upblast exhaust fans (Model CUBE) were installed. With rooftop space at a premium, the fans were installed amidst the rooftop landscaping near the area where residents gather to relax. Greenheck CUBE fans were selected because of their ability to meet both the air performance and low sound level requirements. Each CUBE fan was mounted onto a roof curb with a sound baffle built into it to provide additional sound reduction. True vibration isolators provided additional protection against sound transmitting down into the duct work while ensuring that the fans run smoothly and quietly. The unique one-piece wind band, which is continuously welded to the curb cap, provides a high level of product integrity.

Variable frequency drives were used to control fan operation in response to heavy-use and low-use demands. Greenheck's 14 different sizes of CUBE fans allowed for the selection of just the right fan for the required performance. This resulted in a very energy efficient package.

Greenheck inline fans (Model BSQ) were selected for the space-challenged mechanical room because of their compact square housing design and easy serviceability.

The Results
The Solaire was fully occupied within six months of completion, and residents paid rental rates approximately 5% more than similar buildings. Much of the appeal of The Solaire came from the prestige of living in New York's first "green" apartment building and the country's first high-rise residential building to receive a LEED Gold Rating from the U.S. Green Building Council. Residents make frequent use of the rooftop gardens and seem oblivious to the exhaust fan operation as shown in the accompanying photos. Though the Green Guidelines required energy efficiency 30% greater than what was mandated by the New York State Energy Code, The Solaire uses 35% less energy than comparable buildings, and 65% less electricity during peak demand periods.
Information 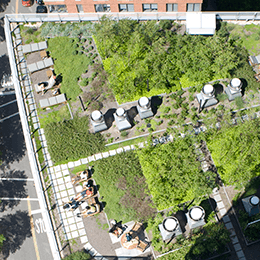 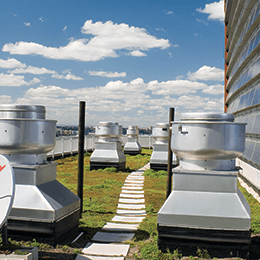