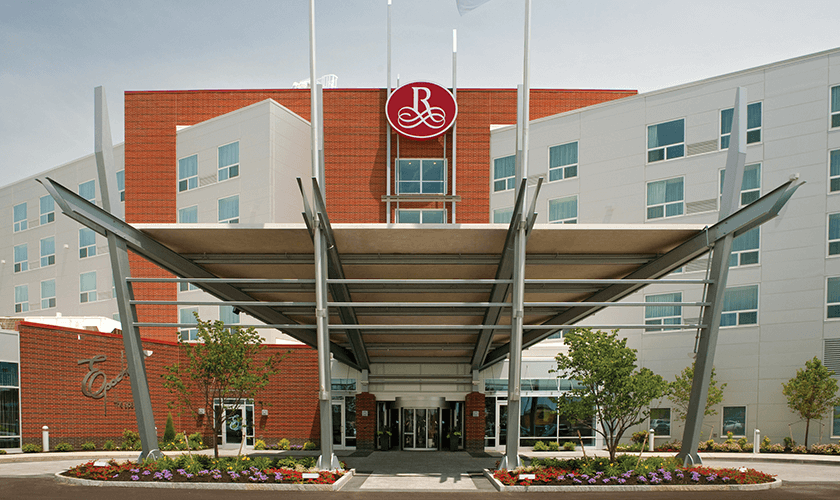 In January of 2009, construction began on a new, upscale Renaissance Boston Hotel & Spa at Patriot Place in Boston, MA. The building's owner wanted a top performing, energy efficient HVAC system that had the capability to adjust airflow based on demand and operate quieter than traditional systems. Typical bathroom exhaust systems use over-sized rooftop fans running 24 hours a day to assist in exhausting air from a common riser that multiple bathroom fans exhaust into. Unfortunately, these fans often run continuously, tend to be louder, use more energy and exhaust excessive amounts of the conditioned air from the building.

The main challenge of this project was to design a cost effective fan and control system that could reduce energy consumption and provide a variable exhaust flow based on the number of bathroom exhaust fans that were in use and still properly ventilate the guest bathrooms.

The Greenheck representative, Buckley Associates, proposed the Greenheck GreenVent system with the Vari-Green motor to the design team at Zade Associates, over the traditional fan with a VFD and pressure sensing system. The GreenVent system monitors the pressure in the duct work and adjusts fan speed from 300-1750 RPM to compensate for the number of hotel bathrooms in use, which significantly reduces unnecessary tempered air from being exhausted. All fans are powered by Greenheck's proprietary high efficiency Vari-Green motors. The Vari-Green motor is a brushless DC (electronically commutated) high-efficiency motor that runs off a 115 volt single-phase input that runs quieter, cooler and offers higher efficiencies with improved speed control capabilities as compared to standard motors. Vari-Green motors are capable of operating from 20% to 100% (80% turndown) of full speed versus 70% to 100% (30% turndown) for PSC motors, which are commonly used on direct drive fans.

The hotel opened in June of 2009, and the system has been a tremendous success according to Mark Jeffery, general manager of the Renaissance. "Because the fans run at a minimum speed most of the time, they operate more efficiently and are much quieter than our other systems."

The installing contractor, Brad Cady, (PH Mechanical Corporation, Boston, MA) was pleased as well, stating "The Greenheck GreenVent system was delivered on time with clear, easy-to-understand instructions. It made the entire installation process a breeze."

The GreenVent System allows for a variable volume system based on demand versus a 350 cfm constant volume system that would be found if using a standard direct drive fan. Based on actual operating data, varying the speed of the fan can help save 315,000 ft3 of air from being exhausted from the building every day, which allows the hotel to save over $630 per year with each GreenVent System. With the 22 systems installed, the hotel can expect to save almost $14,000 per year in heating and cooling costs by reducing the amount of conditioned air that is exhausted from the building with the Greenheck GreenVent System. 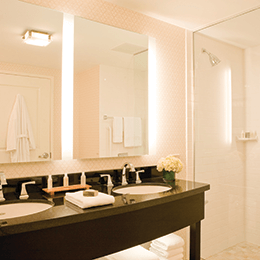 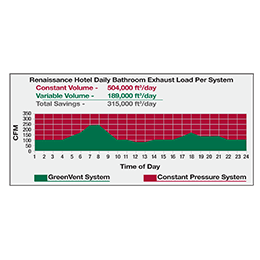