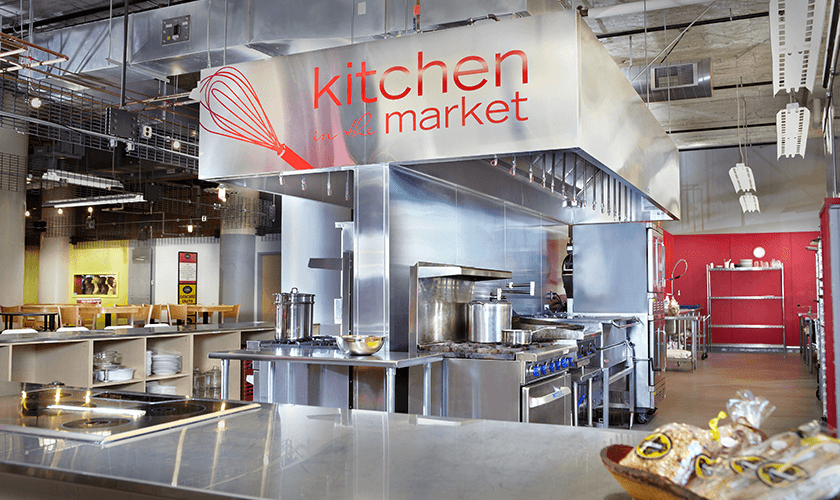 • Efficiently exhaust smoke and cooking odors from 19 separate cooking stations.
• Prevent cooking odors from entering the adjoining condominiums and apartments.
• Install an energy efficient system that could respond to a wide variance in cooking loads and accommodate the turnover of tenants.
• Reduce duct-cleaning maintenance costs and prevent roof damage.

The Midtown Global Market is a thriving, indoor international public market in south Minneapolis, Minnesota that features fresh and prepared foods and a selection of arts and crafts from around the world. The Market opened in May, 2006 as part of a major renovation of the large historic Sears Department Store and Distribution Center. The Market is located on the first floor in a lower profile section of the building beneath a 15-story tower section that contains 350 condominiums and apartments. The condos, apartments and a large corporate office were also part of the renovation. The Market, itself, serves as a great starting point for entrepreneurs who want to open a business without having the expense of leasing or purchasing their own building. More than 50 individual vendors occupy The Market including approximately 19 different restaurants that serve a wide variety of ethnic and American foods. Because many of the restaurants have grilling and cooking operations, 19 separate kitchen ventilation hoods had to be installed in The Market as part of the renovation.

The major challenge was minimizing grease entering the ductwork and its exposure to the roof and adjacent buildings. With so many restaurants located in one spot, the potential volume of grease-laden air produced by the grills and stoves was tremendous. By installing 19 Greenheck wall canopy kitchen hoods with Grease Grabber™ dual stage filtration systems, 100% of the grease particles five microns and larger could be removed from the air stream prior to entering the ductwork.

To accommodate varying cooking demands within The Market, the 19 kitchen hoods were distributed over six different ventilation zones. Airflow in each zone can be adjusted as needed to correspond to that zone's cooking demands and occupancy level. When the first restaurants opened, they were assigned to one ventilation zone. Other zones were activated as more restaurant tenants moved in.

Another ventilation challenge on this project was finding a way to direct the exhausted odors from the different restaurants away from residents in the apartments and condominiums who wanted to open their windows for fresh outdoor air. Greenheck factory engineers teamed up with project managers to come up with a very unique solution for this challenge. Six Greenheck Vektor-CD lab exhaust fans with high plume nozzles were installed on the roof of The Market. The Vektor-CD is designed to dilute and remove hazardous or noxious fumes from laboratories by propelling the air hundreds of feet above a building. In this case, the Vektor-CDs provide a perfect solution to dilute and exhaust cooking odors and smoke away from the building's residents.

The Grease Grabber dual stage filtration system has performed admirably. And, not a single resident has complained about restaurant odors from The Market thanks to the installation of the six Vektor-CD lab exhaust fans. In addition, building inspectors from other nearby communities stop by frequently to observe the unique system.

There has been absolutely no grease observed on the roof and very little grease has entered the ductwork. The ventilation zone serving the busiest restaurants was cleaned for the first time four years after installation, and no grease buildup was observed. "You could still see the magic marker lines in the duct four years after we opened the restaurants," said Jeff Alexander, director of the Midtown Global Market. The second busiest ventilation zone lasted four and one half years before its initial cleaning. Alexander estimates they have saved over $100,000 in maintenance and duct cleaning costs since opening in 2006. 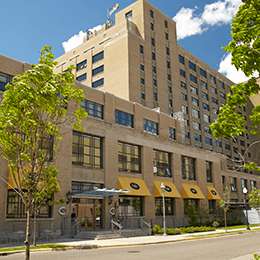 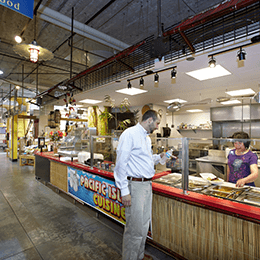 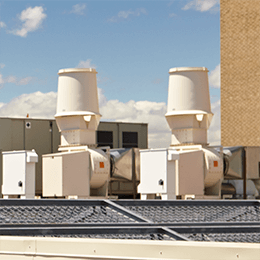