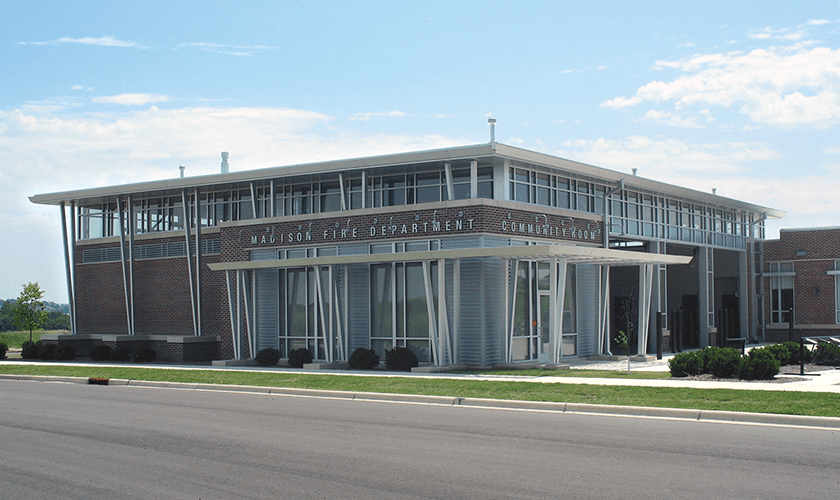 • Help save energy by reducing cooling costs where no natural shade exists.
• Create an appealing outdoor gathering area for the resident firefighters and public visitors.
• Design sunshades that contribute to the overall aesthetic goals of the architect and that are able to tolerate heavy snow loads in the winter.

A newly constructed fire station in an attractive, but undeveloped new urban community in Madison, Wisconsin was designed to make a statement in the neighborhood and set the tone for future commercial, retail and residential development. Faced with a treeless sloping prairie and overlooking a wetland and prairie grasses, the architect and City of Madison officials wanted this first public building to communicate a restrained civic presence by conveying importance - without being pretentious.

The greatest challenge of this project was to site the building so that the functional requirements of the fire station were in balance with the importance of defining the street edge in this pedestrian-oriented neighborhood. Long, flat drive-in and drive-out lanes necessitated that the building was pulled back from each street corner, but city officials and the architect wanted to make sure area residents walking past the building were well aware that emergency vehicles might appear at any second. In addition, because the station was a publicly funded building with a community room for neighborhood meetings, officials wanted Fire Station #11 to reflect a warm, friendly and inviting feeling.

To add depth to the building and to help reduce cooling costs, Greenheck designed and manufactured a unique sunshade control area that consists of free-standing clear, anodized sunshades at the front entrance to the fire station. Freestanding supports were strategically located to complement vertical sightlines of windows and other building lines. To hide fastening hardware, Greenheck designed a custom 12-inch bullnose fascia that wrapped around the perimeter of each sunshade. Maximum shading was achieved with blades tilted at a standard 45 degree angle.

Architectural sunshades also were installed 25 feet above the ground level over an upper row of windows above the fire engine garage doors to allow firefighters to keep windows open for maximum fresh air ventilation during peak hours of sunshine. To complement the building's clean lines and aesthetic appeal, these sunshades projected six feet from the building. The six foot extension required a special aluminum support tied to the foundation to tolerate heavy snow loads in the winter. Finally, a 25 foot x 35 foot freestanding sun-controlled area with clear anodized sunshades was created to maximize shade over a patio and barbecue area during the hot summer months in Madison.

The Results
• The Madison Fire Station #11 is an attractive new addition to the city's east side neighborhood.

Pedestrians strolling past the sleek new station admire the friendly, sun-shaded areas that project outward from the front of the building, and often stop to visit with firefighters under the sun-shaded outdoor patio. Double rows of trees have been planted alongside the building and when mature will further cool the site and make the building even more inviting. 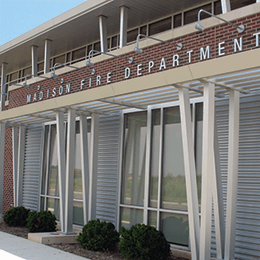 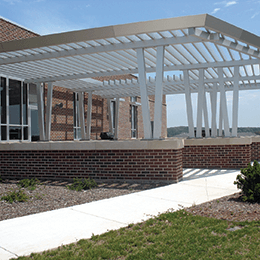